I recently discovered that it's possible to create a VMware ESXi 4 install USB using nothing but UNetbootin and official VMware ESXi 4 ISO file. Why would I want to do that? So I can install ESXi on servers without CD/DVD drives, they have become quite common lately. USB install is much faster than installing from optical media, and you save environment by not wasting a blank CD on a software version that will become outdated in three months or so.

In the past I have used a great little Bash script by Varazir that allows you to not only make a bootable USB with ESXi on it, but can also customize and merge various drivers into the install image. However, if all you need is a vanilla install, UNetbootin makes it a lot easier and works on both Windows and Linux platforms.

Just choose the "Diskimage" option and browse to your VMware ISO and you'll have a installation USB drive in no time. 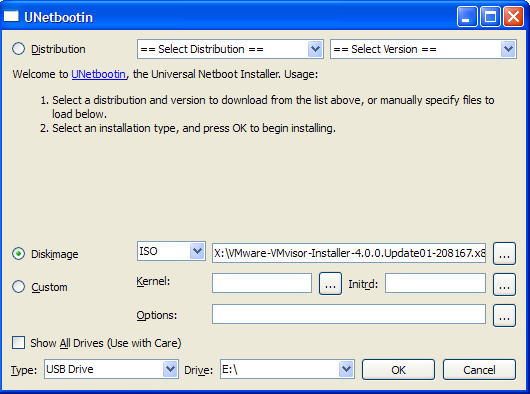