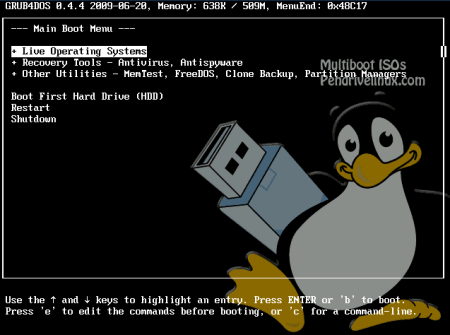 I have mentioned various ways to create a Live USB from a LiveCD before, but the following method, in my opinion, takes the prize. Once again great guys at pendrivelinux.com put together tools and steps necessary to Boot Multiple ISO from USB.

I have modified the process a bit to make the result suite my needs better, and encountered a few "gotchas", so as usual here are my notes.

I wanted my USB drive to hold a persistent Linux distro, cloning, imaging, backup and recovery tools, antivirus and malware scanners, and some hardware testing utilities for good measure. I decided that the following list will be more than sufficient for my needs:

I formatted my spare 8GB drive with HP USB Storage Format Tool as FAT32, downloaded the MultiBootISOs-v1.5.7.exe from the pendrivelinux.com and ran it to create MBR and GRUB menu, then downloaded some of the ISOs I wanted from the list of supported distributions. Pay attention to the ISO descriptions, some of the ISOs could be simply copied to the root directory on the drive, some need to be extracted with 7-zip and some need to be renamed and placed in specific folders. I have also encountered the "contiguous disk area" boot error mentioned on the page and had to defragment one of my ISOs with wincontig to get it to boot. Then I used Casper-RW Creator utility to generate a persistent file for Ubuntu Desktop.

After testing every single ISO and making sure they work as expected, I went through the generated menu files: menu.lst and all of the menu/*.lst and removed all entries and submenus, except those corresponding to my ISOs. Enjoy!